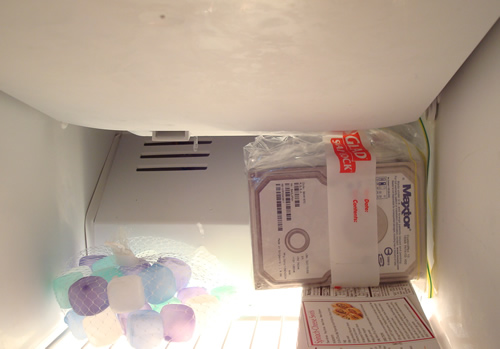 While there are many do it yourself computer enthusiasts who make claims and draw attention by showcasing methods for reviving a failed hard drive and helping you recover your data, there is more myth than fact to many of their claims. We’ve outlined some of the top data recovery methods that we’ve heard of that don’t work and why.

Freezing, which quite literally involves putting the hard drive in a freezer, has been a tried method by many DIY computer enthusiasts, and sadly many believe that it is a reliable form of getting a hard drive to work. As many advocates say, parts hard drive may have become misaligned a bit, and freezing the hard drive contracts and expands the parts inside the hard drive to move things around just enough to realign everything to start working again. There are a few things wrong with freezing your hard drive.

#1. It only addresses a physical issue specific to the motor on the hard drive.

When the motor which causes the spindle to move which rotates the platter on your hard drive. Freezing moves the platter slightly, which frees up the short and allows the motor to spin. We’ve covered this method in a bit more detail here and why you shouldn’t try it.

#2 You’ll do more harm than good

Today’s hard drives are so precise, that severely altering their temperature would only misalign parts of the hard drive that were not even damaged to begin with. Additionally, freezing can cause condensation on the outside and inside of the hard drive, causing further damage to the platters.

#3 Most issues are not physical

The majority of issues related to hard drive failure are logical and not physical, and this method only addresses a fix to a physical issue.

Quite literally, this method involves giving the hard drive a light whack against another surface. As advocates have stated, the method realigns parts of the hard drive that have become out of place (most have stated the platter or the head). The hard drive just needs a good whack at just the right angle and force to get things back in place. It should go without saying that fighting fire with fire isn’t your best solution, and even if the hard drive issue is physical and not logical you will likely make your data less likely to be recoverable by a professional. As we’ve stated before, physical problems are often not the cause of hard drive failure, and the whack method wouldn’t help fix a logical problem in any way.

Many people assume in the case of a power surge that something bad happened to the electronics board of the hard drive, and simply by switching out the board with an exact or similar model will get the hard drive to function again. Unfortunately this switch typically doesn’t go as smoothly as people would imagine, as electronic boards are typically configured to function specifically with the drive that they are configured with. Additionally, installing the wrong type of electronic board can do damage to the head, which will damage the platters, which may make data recovery of the hard drive nearly impossible.

Before trying any of those techniques, we would recommend contacting us first. Physical problems with the hard drive are often not the culprit of hard drive failure, and it is important to not try anything that would further damage the hard drive. Additionally, even if either method were to work in some way, these hard drives are typically on their last legs and won’t be able to function for you in the long term. We have the knowledge and tools to diagnose hard drives quickly and effectively, and without doing any further damage to your hard drive.